The Universidad Laboral de Gijón is located in Gijón (Asturias, Spain).   Built between 1946 and 1956, is the most important architectural work built in the 20th century in Asturias and is considered, with its 270,000 m2, the biggest building in Spain. 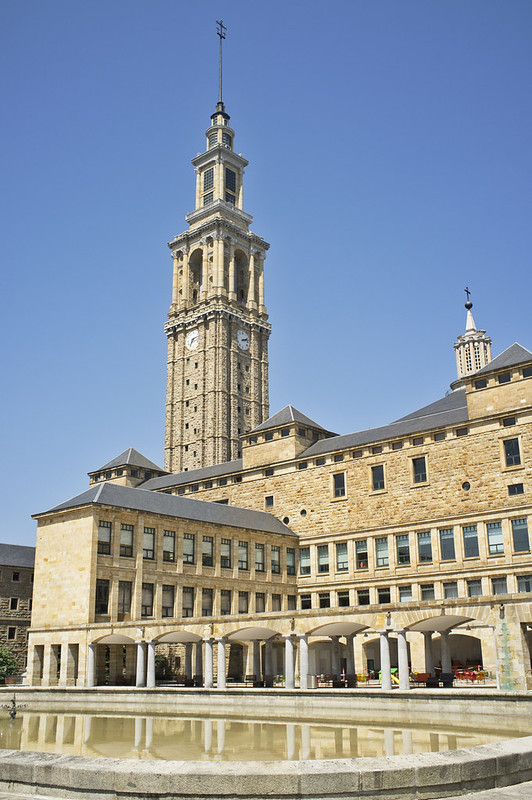 Originally it was designed as an orphanage for the children of miners, but transformed during its construction into a Technical College.

It was build by Luis Moya Blanco as a grand self-sufficient, utopian city.  It had 100 hectare farm and was fitted out to train generations of working-class children as highly qualified professionals.

The building is built with its back facing Gijón. Luis Moya designed it based on the Parthenon, with the aim of surrounding the building before entering to enjoy its full magnificence.

The best way to give new life to a building is to find new uses for it. And this is exactly what has been done.

In 2001 the Government of Asturias took control of the deteriorated and underutilized building, with the aim of bringing it to life ensuring it new educational and cultural uses. After intensive works, in its restored walls there are now university, professional and artistic training centres; rooms for conferences, events and seminars, the Asturian Radio Television and, as the driving force of the city, LAboral Art and Industrial Creation Centre, a space for the exchange between art, design, industry and economic development.

Since October 2007 the restored Laboral Theatre has joined the cultural offer. Contemporary culture, creative experimentation and multiple nets interrelate and set the standard for a town which aspires to keep open and watchful about everything that is going on in art, technology, research and communication and which breathes new life into the idealistic and perplexing architecture that Luis Moya Blanco displayed in a singular building, from the magnificent church to the restored tower viewpoint, and whose history and characteristics may be known in visits guided by students from the town itself.

2 thoughts on “Laboral University, the City of Culture”